Notes from The Wonder City

New York City and other inspirations

How NYC Does Spring

It got up to a respectable 60° F this past Sunday, but for most of the day it was colder–and windy–making it feel down right chilly. If you were to take a stroll through Central Park, you’d think it was the middle of summer. Everyone was out. The city was a picturesque tableau of the pleasures of urban life. People were picnicing, playing baseball, and sunbathing as though they were in balmy San Diego. If you looked really closely, you could see goosebumps on their bare arms, and if you listened, the sound of teeth chattering.

And who can blame them? We’re desperate here. We’re like a people emerging from a millennia-long ice age. We’ll sit out side if temps reach past 50 and bare our legs if they climb above 55. We know it’s all so fleeting, that before we know it, summer will have passed us by, and then once again, the descent into the big freeze. 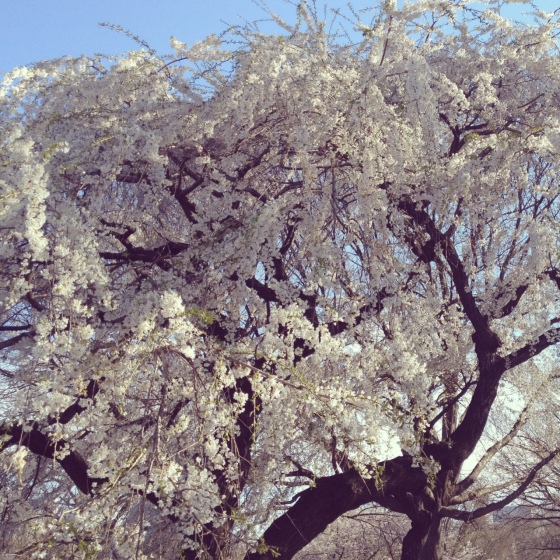 A Sweets Tour of the Upper East Side

Now that it’s finally beginning to feel like spring outside (knock on wood, spit thrice over your left shoulder, pray to the god of your choosing), it’s time to let your hair down and once again set out on foot across this great city. What better place to start than the Upper East Side? Yes, that Upper East Side. While we weren’t looking the buttoned-up ‘hood has transformed, with the help of a few longtime standouts, into the greatest dessert destination in NYC.

Maison Kayser:  The flagship NYC location of a Parisian-based patisserie, this shop is known for breads and pastry and a healthy collection of American treats like cookies and brownies. A sit-down restaurant is filled with ladies-who-lunch enjoying open faced sandwiches and salads. If you’re sitting down to lunch or dessert, make sure to ask for a bread basket filled with an assortment of bread samples; they won’t bring it to you otherwise. 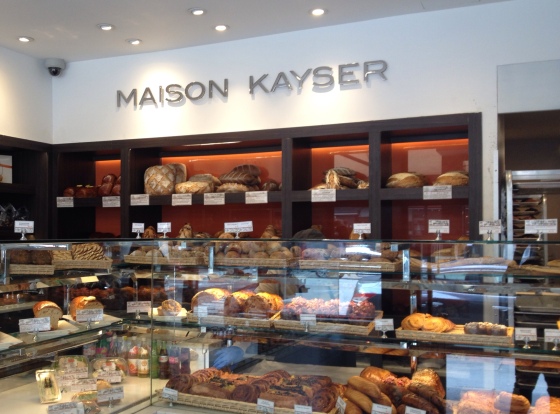 FB Patisserie: The fancy older sister to Francois Payard’s downtown bakeries, this location specializes in mousse-based pastry, tarts and French macarons. It’s a best-of compilation of French pastry. In front, there’s a casual cafe perfect for enjoying an eclair and a coffee, while the back is host to an upscale full service restaurant–with prices to match. 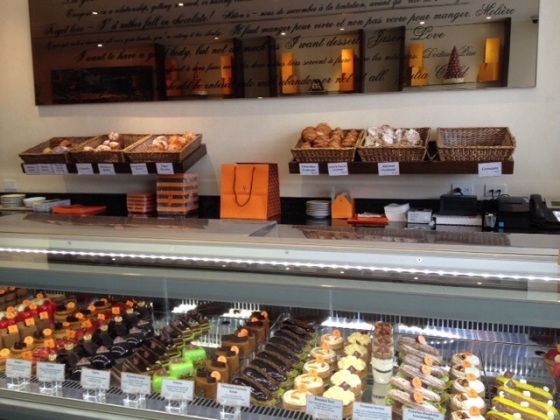 Lady M Confections: This slim minimalist shop is home to one of my favorite cakes ever, the original mille crêpe cake, shown below at right. It’s not cheap ($7.50 a slice), but with 20 paper-thin crêpes and light, not-too-sweet cream layers, it’s an ideal celebratory indulgence. There are other flavors and other cakes, but the original is the superstar. The guidebook writers seem to think so, too, as the shop was packed with tourists during a recent visit. 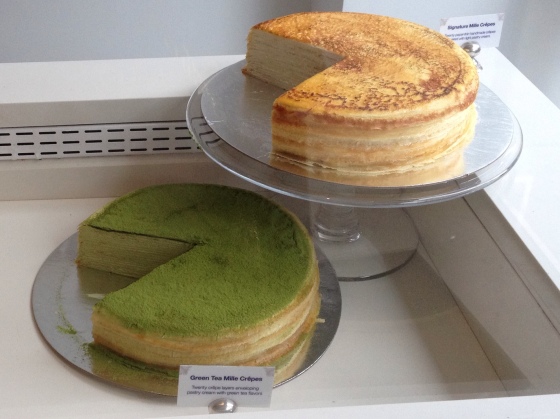 William Greenberg Desserts: This shop has been an Upper East Side institution for nearly 60 years. Their famous black-and-white cookies are made in the traditional way (more spongey cake than cookie, fondant icing) and are customizable when ordered in large quantities. They also specialize in Jewish desserts, which for the next two weeks or so means kosher-for-Passover favorites like chocolate-covered matzoh and flour-less brownies. 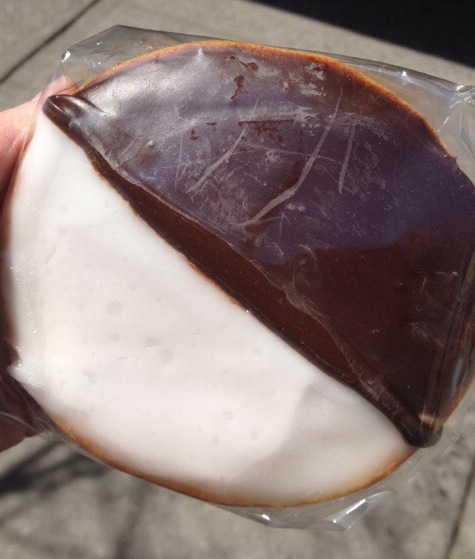 Glaser’s Bake Shop: Open for over 100 years, this no-frills shop harkens back to the Upper East Side of yesteryear, back when Yorkville (the name of the eastern section of the neighborhood) was filled with central European immigrants. The influence is evident in their large selection of Danish pastries, but the bakery also specialize in American favorites like cupcakes, brownies, pies and layer cakes. The customer favorite is the black-and-white cookie, which, in contrast to William Greenberg’s they top with fondant and buttercream frosting.

Orwashers: Our tour of the historic bakeries of the Upper East Side continues, and this one’s a real gem. Orwashers–opened in 1916– churns out award-winning artisan breads; their French baguette was recently declared the best in NYC by Serious Eats. They have pastries, too, as well as filled-to-order doughnuts (chocolate or sugar) with your choice of one of 5 fillings. The red raspberry ($4.25) was everything a jelly doughnut should be. 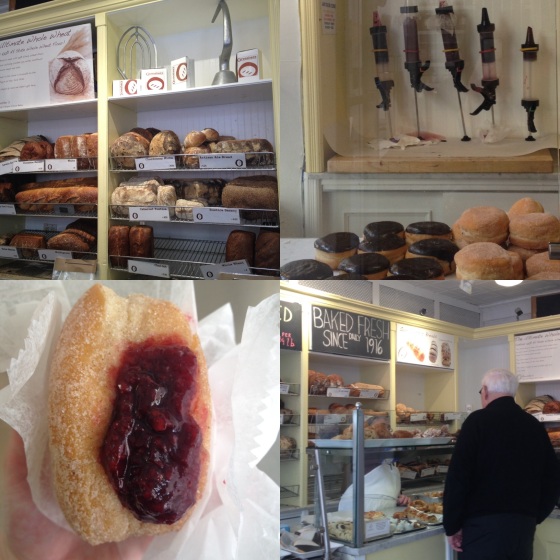 Two Little Red Hens: This all-American bakery is extremely popular with the locals, even now, when it’s situated on the wrong side of Second Avenue subway construction. On a recent visit, the shop was out of a lot, and patrons were crowding in to enjoy oversize buttercream-topped cupcakes. The Brooklyn blackout cake is a favorite for birthdays. 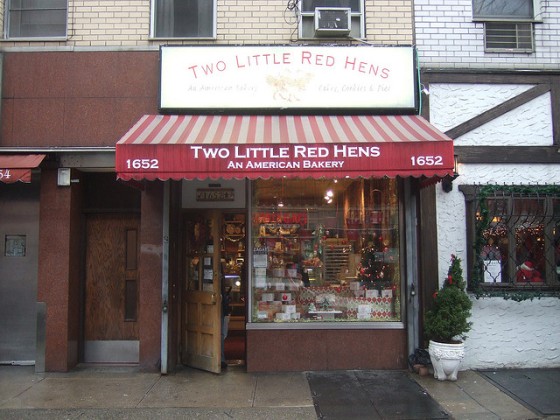 Canelé by Céline: This tiny adorable bakery specializes in mainly one thing–canelés. These ridged French pastries are marked by a soft, custardy center and a browned caramelized exterior. The shop sells unique flavors like caramel, dark chocolate, raspberry and rum, and even a few varieties of a savory canelés, with chorizo or parmesan cheese. It’ll set you back $4.90 for a pack of three. 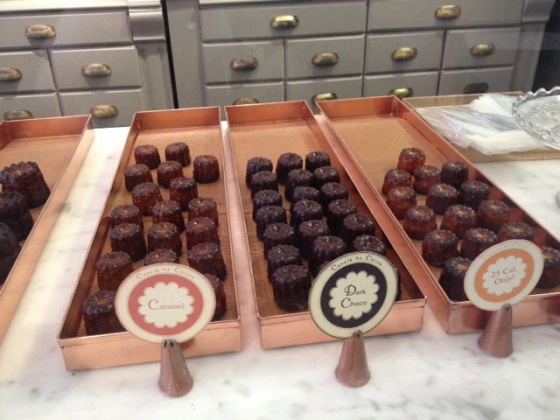 Ladureé: It’s hard to overstate the importance of Ladureé in the Parisian collective consciousness. The mint-green bag is ubiquitous around the city, and Charles de Gaulle airport even has an outpost of the famous shop. The speciality here is French macarons in a rainbow of flavors. The Upper East Side location is the first in the U.S. (one recently opened in Soho as well) and the macarons are just as good as the ones overseas–light meringue, flavorful filling. Their raspberry macaron ($2.80 a piece) is the macaron by which I judge all others. 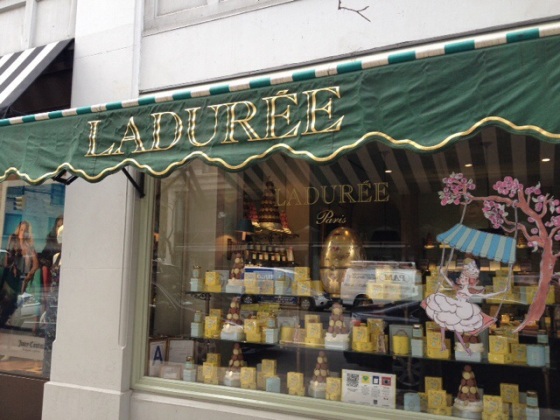 Sprinkles Cupcakes: This L.A. transplant is all about the cupcakes ($3.75 a piece). Yes, the cake is moist and the frosting is flavorful, but I think what people are drawn to most is the minimalist design of the shop, something mostly absent from American throwback-style bakeries. Next door is a 24-hour cupcake ATM, which is exactly what it sounds like. You pick your cupcake from a touchscreen, swipe your card, and within seconds, a little door opens with your cupcake of choice enclosed in a to-go box (add $.50 for the convenience). Is it at all necessary? Absolutely not. But it sure is cool. 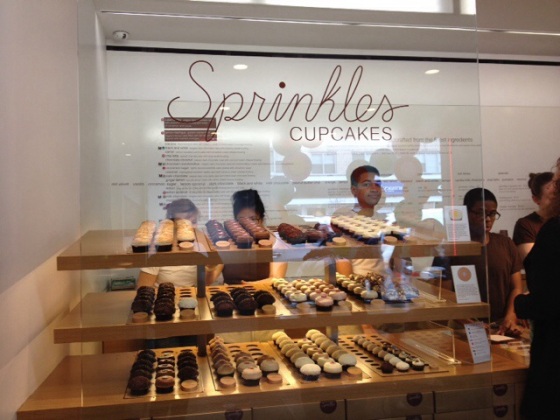 Dough Loco: There’s some debate about whether this shop’s location, on Park Ave. and 97th St., constitutes the Upper East Side or East Harlem. We’re not concerned with realtor definitions, just with dessert. The doughnuts ($3 a piece) remind me a lot of the ones from Dough in Bed-Stuy. Both shops feature yeast doughnuts topped with unique coatings. The ones here are smaller, though more dense. Flavors include maple miso, blood orange, raspberry Sriracha, and the below, peanut butter and cassis. Blue Bottle coffee products help you wash them down. 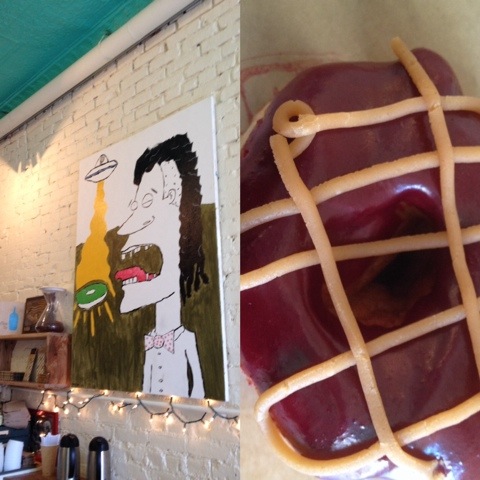 Le Churro: I have a soft spot for churros. After all, what’s not to love? Freshly fried dough drenched in sugar and served with a chocolate dipping sauce. The ones here (4 for $3.95) are thin and light, in contrast to the heavy churros of the subway platform and Costco cafe (hey, if you’re in a bind…). They offer multiple dipping sauces (chocolate hazelnut, sweet mocha, to name a few), chocolate covered churros, bite-sized churros and even filled churros, for those too lazy to dip.

Ô Merveilleux Belgian Meringue: I had never heard of Belgian meringues before, but they’re the specialty at this quaint new Second Avenue shop. These treats, which come in two sizes, layer meringue and whipped cream and are topped with chocolate shavings or speculoos cookie crumbs. The small, at $2.70, is plenty sweet to satisfy a serious dessert craving. They have other offerings too, including cupcakes, croissants, cakes, cookies, brioche and tarts. 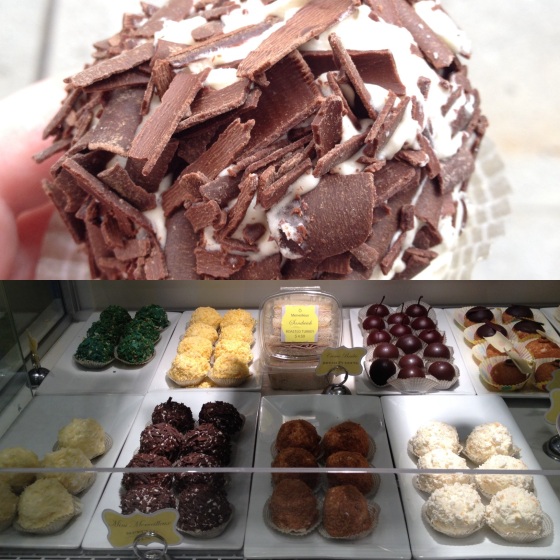 1 Chocolate chip pudding at Sugar Sweet Sunshine: This sugar bomb is definitely not for the demure dessert lover. Packed with whipped cream, butterscotch pudding, and hunks of spongey chocolate chip cookie, this treat is as straight forward as they come–which is why I love it so much! But who needs nuance when you can have an indulgent cup of everything that makes life worth living? And for $4 for a standard 10 oz. cup, it’s more than enough for two people. The bakery is open until 11 p.m. on weekends, making it one of the only post-dinner casual dessert destinations on the Lower East Side. 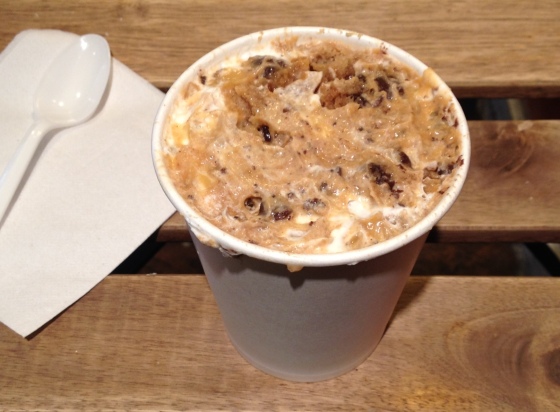 2. Eating at the bar: A few weeks ago, my husband and I ate two of our weekend meals at the bar. The first was a date night drinks-and-apps-style dinner at expansive French restaurant Lafayette. The second was a hearty brunch at Ditmas Park favorite The Farm on Adderley (below). I’d forgotten how much I enjoy the casualness of bar eating. You never feel rushed. No one is trying to upsell anything. You can always get the bartender’s eye if there’s something you need. Plus, you get an insider-y view of the restaurant’s goings on. 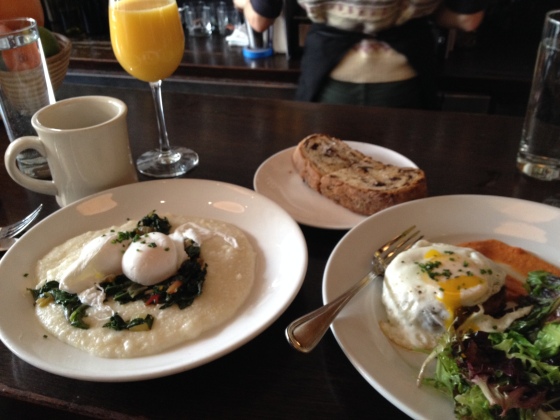 3. Brooklyn’s Chinatown: After a decade in the city, I sometimes feel as though I’ve seen nearly every corner of NYC, my own borough especially. I am, of course, wrong. There is so much left to explore. For years I’ve been meaning to check out Brooklyn’s Chinatown, which is home to one of the biggest Fujian immigrant enclaves in the city. Starting at about 42nd Street and 8th Avenue, right below Greenwood Cemetery, the strip is 20-plus blocks, densely packed with bakeries, hot pot restaurants, noodle shops, dim sum parlors, grocery stores, fried fish carts (below) and so much more. On a Saturday afternoon it was certainly more crowded than Manhattan’s Chinatown on a regular weekend, and the latter gets a bump from tourists, who were nowhere to be seen here. My husband and I had a delicious báhn mi at the bare-bones Ba Xuyen, one of the Vietnamese restaurants sprinkled throughout the ‘hood. 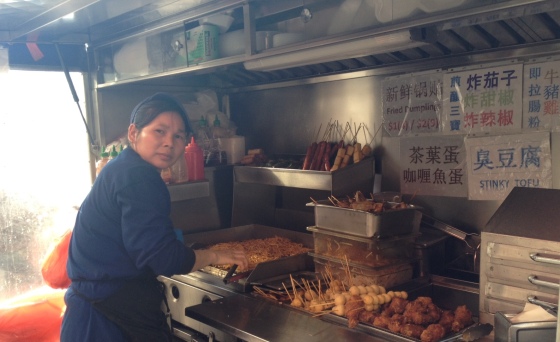 4. Panorama of the City of New York at the Queens Museum: First conceived as an exhibit for the 1964 World’s Far, this room-sizes panorama is the highlight of the Queens Museum‘s collection. The model is beyond impressive, featuring every building constructed before 1992, the year of the last full update, with a few additional buildings added sporadically since 2009. There are all sorts of small, inventive details, including a plane on a nearly invisible wire that lands and subsequently takes off from the scale version LaGuardia airport. Every few minutes, the city goes dark and small bulbs illuminate the panorama. 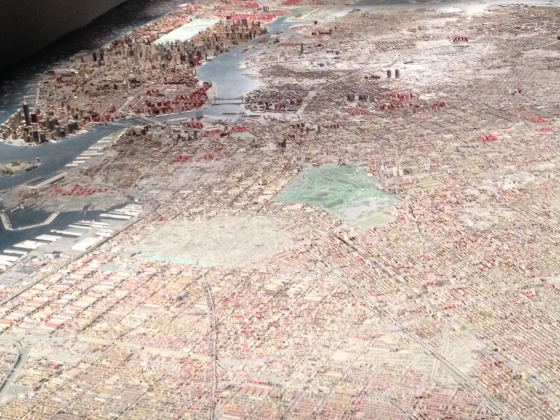